Understanding The Enigma That Is Rekha

Rekha Ganeshan, better known by her stage name Rekha, has mystified generations of viewers with her silence and the smile that hints at tales untold. 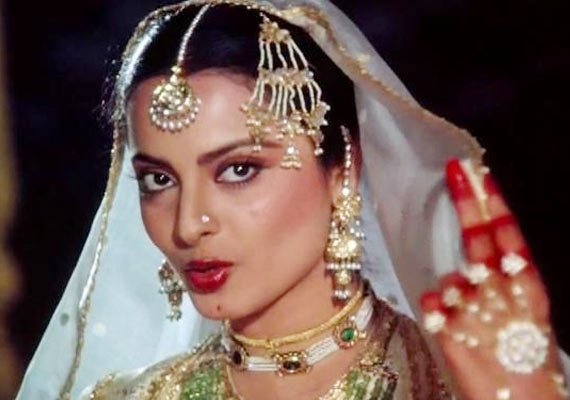 Her enigma refuses to fade away in shades of grey or loneliness. Tabloids name her a tragic tale, an enchanting seductress and “a reclusive woman twisted bitter by lecherous men and loneliness”.

Why is it that her presence in public events is flavored by her high-spirited persona? She’s usually seen as chatty, optimistic and sporting a brilliant sense of humor. She seems to me a woman with no regrets, no qualms – always wearing her heart on her sleeve.

When Rekha walked into Bollywood at the tender age of 13, she said it was like walking into a jungle – unarmed.

Guys did try and take advantage of my vulnerability.  I should be in school, having an ice-cream, fun with my friends, why am I even forced to work, deprived of normal things that a child should be doing at my age? Every single day I cried, because I had to eat what I didn’t like, wear crazy clothes with sequins and stuff poking into my body… I was pushed, literally dragged from one studio to another. A terrible thing to do to a 13-year-old child! Rekha was the daughter of a celebrated Tamil star, Gemini Ganesan, by virtue of which she should have had a walk of roses to success. However, her father disowned his paternity to her during her childhood. As a result of which, the naive 13-year-old girl ventured out to become the bread-winner for her family.

Acting was her destiny, but never her choice. After a few Tamil hits, Rekha’s Bollywood debut ‘Saawan Bhaadon’ made her a star overnight. However, she was still “just a glamorous girl” receiving distasteful scripts and scornful criticism for her plump figure and dark complexion — a complete misfit in Bollywood’s list of idealized beauties.

I was called the Ugly Duckling of Hindi films because of my dark complexion and south Indian features. I used to feel deeply hurt when people compared me with the leading heroines of the time and said I was no match for them. I was determined to make it big on sheer merit.

As hard as it is to imagine this dazzling specimen of beauty being labelled the ‘Ugly Duckling’, what is commendable is that widespread public criticism and lack of belief didn’t shake her morale but gave her an unstoppable push to prove her mettle.

When the going gets tough, the tough get going.

After almost a decade with various award nominations and enthralling movies, Rekha had tangible validation from the industry’s renowned jury of critics.

She won her first Best Actress Filmfare Award for Hrishikesh Mukherjee’s ‘Khoobsurat’. Rekha said she owed her smooth performance to the role she played in the movie,

When ‘Film World’ mentioned Rekha’s epic transformation, it was declared: This woman is here to stay!

Rekha’s done it. Smoothly, successfully. From a plump, pelvis-jerking, cleavage-flashing temptress, she has metamorphosed into a sleek, accomplished actress. Gone are most of the inane mannerisms, pouts, wiggles and giggles. She walks in like an electrifying blaze – you can tell she has arrived.

Rekha is not just a flawless example of professional success in the Hindi film industry. Her personal life has been of vital importance to make her a wave of wilderness and undying spirit that she is.

Her affair with Amitabh Bachchan is no secret. In her Filmfare interview in 1984, she proclaimed her love with jaw-dropping boldness. Her proclamation was honest and impressive. Amitabh never admitted to the affair owing to his marriage to Jaya Bachchan, but this never perturbed Rekha. She seems to have understood him in a way only a person with unconditional love could. 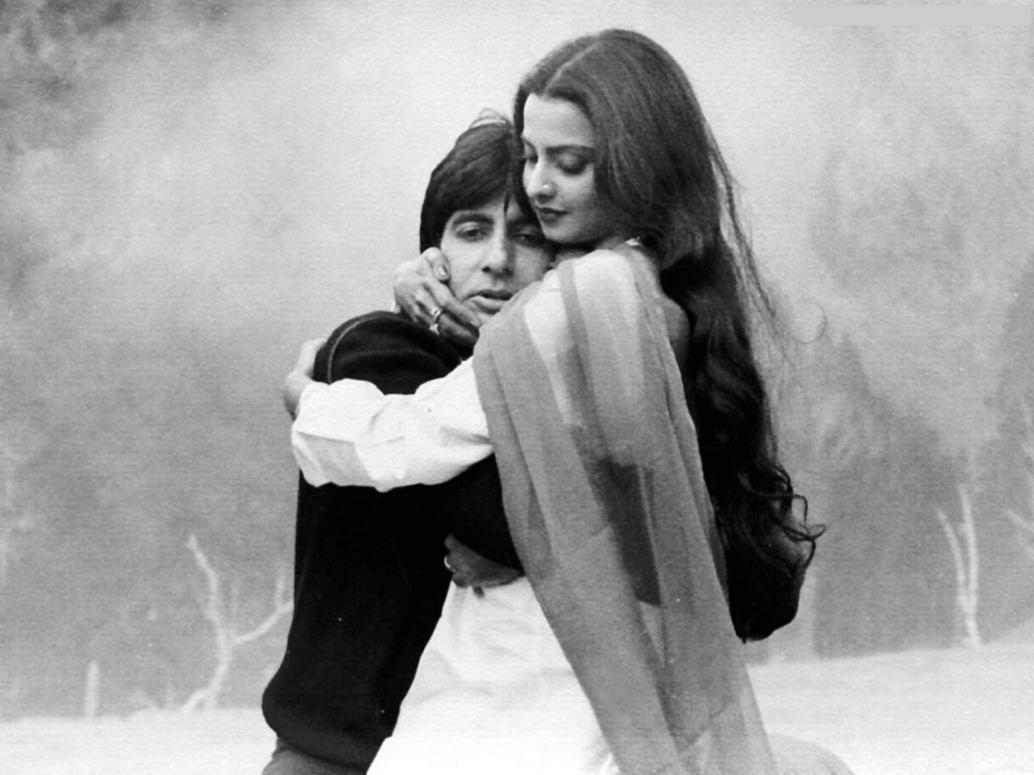 I love him, he loves me – that’s it! I don’t care what anybody thinks. If he would have reacted to me like that in private I would have been very disappointed. But has he ever done that, I ask you? So why should I care about what he has said in public. Not that he has 10 rollicking affairs! Mr. Bachchan is still old-fashioned. He doesn’t want to hurt anybody. So why hurt his wife? Amitabh’s presence in her life was not just juicy tabloid gossip. It was what made her beautifully gracious. Her dignified silence in all these years, her understanding of the love she had for him and her respect for his family is beguiling. How does she do it?

Rekha is a poetry- romanticism whiffed in all her realm.

Rekha had a tragic one-year marriage and some much-talked-about affairs. Her husband committed suicide leaving Rekha stranded in the midst of nasty speculation by the press. Soon after, she was back on the big screen as the avenging angel with hits like ‘Khoon Bhari Maang’ and ‘Phool Bane Angaarey’.

Actresses of her stature have mostly fled the Bollywood scene, escaping the agony of press attacks and controversial speculations. But Rekha never ran away. What stopped her whenever her heart leaped forward to run? No one knows.

She’s a mystery refusing to unfold. Yet, an absolute perfect example of honesty and candidness.

In the same ‘Filmfare’ interview, Rekha had confessed how she loves her privacy but would love to fill the emptiness of her house with minimum 12 children.

”I am afraid of being 30. I regret not being married, or having children.”

She has always been misunderstood. But never did she had any qualms about it. “If God can be misunderstood, why can’t I be?” Her smoky, mellow voice talks of herself in third person, always, “Rekha is a better person than an actress”.

She has giver herself the due respect, never waiting for a man to come and take a stand. She learned Yoga, spiritual awakening, and healing practices long before they became a voguish trend. She attends all award functions, taking utmost pride in giving awards to young actresses. Her personal gesture to ring Kangana Ranaut’s doorbell to give her the Best Actress award speaks of her open-heartedness.

She is brave, compassionate, beautiful and fiercely independent.

And sometimes, I wonder how lonely a man would feel in his heart to know he lost this incredible woman to his ego. Nothing is more fragile than a woman’s heart and a man’s ego. In her case, both overpowered her.

Nevertheless, Rekha’s immorality comes from this very tragic poem. In fact, I won’t call it tragic. What makes a woman strong, unbroken and immortal can only be one thing, beautiful.

Abhinav Bindra Posted His Hateful Experience With His Coach, And Kohli Should Learn From It

Bigg Boss 12 Masala: Is Anup Breaking Up With Jasleen Because Of This Reason?

This Pilot With Super Hot Looks Takes The Internet By Storm! Pictures Inside!

Solid Proof That Nana Patekar Has Aryan Blood In Him

Forget Priyanka’s Fiancé, A Hotter Nick Has Arrived In India And You Won’t Stop Drooling!

What’s In A Name, You Say? Just Ask The Indian Film Industry

Sunny Leone’s Bhabhi Is Way Sexier Than Her. These Viral Pics Of Her Will Make You Sweat So Bad