Mamata Banerjee-led Trinamool Congress government has been in the news for all the wrong reasons. First came a series of small-scale riots targeting hapless poor Hindus and then a shocking fatwa against PM Modi by Imam Barkati in presence of TMC MP Idris Ali.

Adding yet another chapter, this time the TMC government has decided to add names of more than a dozen Trinamool Congress leaders in history books in the state.

The book titled “Ateet O Aitjhyo” is meant for class eight students and will be taught in the upcoming academic session.

It has a chapter on the Singur land agitation, an event that contributed to ending the Left parties’ sway over Bengal in the 2011 assembly elections.

It mentions Mamata Banerjee as the leader who organised the anti-land acquisition movement and gave a direction to the farmers’ struggle. The book also describes Singur agitation as “historic.”

A school in Kolkata saddahaq

Aveek Majumdar, chairman of the expert committee responsible for re-designing the state government syllabus, has justified the move saying the movement should not have been excluded just because it belong to a political party.

After the Supreme Court verdict on Singur land, the state education department had sent the proposal to the syllabus committee for approval.

“If incidents like Jallianwala Bagh massacre or Sepoy mutiny can be included in the syllabus then why not Singur movement?’ state education minister Partha Chatterjee had argued.

According to Chatterjee, the state government received many proposals from the intellectuals and educationists to include this in the school syllabus.

West Bengal Chief Minister and Trinamool Congress chief Mamata Banerjee has been slammed on a number of occasions for steps that have led to communalisation of the state.

Earlier, in a chapter in the Class VII physics text book, the state education department used a completely made-up word. The traditional name for rainbow in Bengali is ‘Ramdhenu’ or Bhagwan Ram’s bow. However, it was replaced by ‘Rongdhenu’ or bow of colours in school textbooks, as ‘Ram’ is claimed to upset Muslims. Bengali linguistic experts say there is no such word as ‘Rongdhenu.’

This has even led to memes on social media: 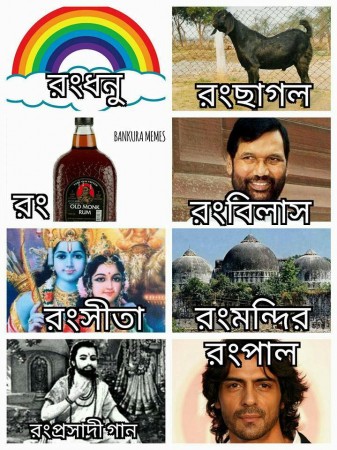 Top 10 cartoon series of all time

Boman Irani To Play The Role Of Nobel Laureate, Kailash Satyarthi, In A Film Titled ‘Jhalki’