In a recent interview to former cricket player of England, Michael Vaughan, , Virat Kohli divulged a lot of behind-the-camera scenes. Apart from his views on incessant comparison on the cricket field, Virat also revealed an incident related to Sachin Tendulkar.

Virat first met Sachin Tendulkar in the year 2008 when Master Blaster came to meet the Under-19 team. Virat couldn’t fumble a single word as he found himself like a dumbstruck fan in front of the God. Virat looks up to Sachin so much as a respectable deity that even after some years when Sachin and Virat went for drink, Virat couldn’t just grab one. He initially hesitated and refused until he gave in to ask for four cubes of ice!

“It is a very Indian thing in front of your seniors you do not want to admit you drink or go to parties. Guys were very strict about it when I was growing up. He asked me for a drink. I said I don’t drink. He persisted. I said I don’t drink. Eventually I said I will have four ice cubes. From then on it was pretty easy.”

As for the constant comparison to Sachin, Virat finds it ridiculously unreasonable as he calls it a deal of chalk and cheese.

“I tried to fight it initially. This country loves comparisons. The moment I started doing well I was already compared to him [Tendulkar] but it is like chalk and cheese in my book. People come up and have debate and say you can break his records. You fight it for a while. You think why me? There are 10 more people in the team why do I have to go through this?” 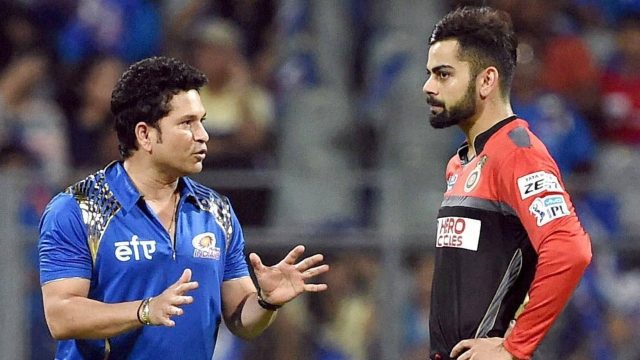 Salman Lectures People On Road Safety During The Launch Of ‘Being Human Cycle’. What An Irony

Today In WTF: Nargis Fakhri Asked To ‘Pin Up’ Her Slit Because It Was A ‘FAMILY SHOW’

Karan Johar Posted ‘Student Of The Year 2’ Poster And Tweeple Want To Know ‘Where Is The Student?’

A Pregnant Kareena Is Still Open To Offers, But Disappointed With Rohit Shetty For Not Signing Her

Finally, Dhoni Attends Yuvraj-Hazel’s Reception And Puts All The Baseless Rumours Of Their Troubled Friendship To Rest

Varun Dhawan said, “I Voted Last Year” And Twitter Had A Huge Laugh

Dhinchak Pooja Confirms Her Entry In ‘Bigg Boss 11’. Says She Will Be Different From Others In The House