A photo has been shared by a Reddit user showing 80 birds of prey sitting in a plane after they were bought tickets by a Saudi prince.

“My captain friend sent me this photo,” user lensoo wrote in the post. “Saudi prince bought ticket [sic] for his 80 hawks.”

The feathered guests appeared to be falcons rather than hawks. 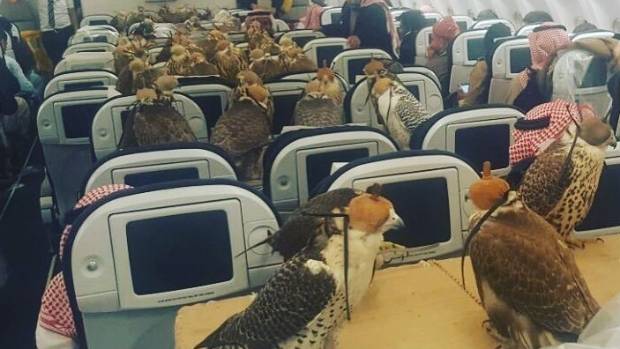 The blindfolded falcons were tied securely down to the seats in the passenger plane, filled with regular passengers. Hoods are used to keep the birds in calm state.

Members of the cabin crew looked on, impassively.

Though it may look unusual to many of us, falcons in the cabin aren’t uncommon when flying out of the Middle East.

“If you fly Etihad or Emirates or Qatar enough you will eventually see someone flying in first class with a falcon sitting next to them,” another commentator wrote.

Falcon is the national bird of the United Arab Emirates and training them to hunt is a popular hobby in the country.

Falconry (hunting with falcons) is a popular pastime in the UAE.

In the UAE, even birds need documentation to fly. The country’s falcons are issued special passports of their own to combat smuggling. The passport – valid for three years – allows the falcons to travel to Bahrain, Kuwait, Oman, Qatar, Saudi Arabia, Pakistan, Morocco, and Syria.

The falcons typically fly first class on commercial airlines; Lufthansa even has a custom-designed “falcon tray” for the purpose.

“We accept the carriage of falcons in the main aircraft cabin provided that all the necessary documents have been obtained. We also accept falcons as checked baggage,” the website of Etihad Airways reads.

Qatar Airways’ website also states that a maximum of six falcons can be brought on economy class.

It is understood they are often transported to take part in hunts, with the birds allocated a seat and placed on cloths to avoid any accidents.

Can You Find That One Owl Who Is Looking At You?