It’s the 105th International Women’s Day and no matter how hard we try to strive for equality every year, there are zillions of unfortunate incidences trying to pull us down. However, her strength to rise up despite the odds, is what makes a woman the Goddess that she’s called. Acid attack is one of the most common felonies committed in the name of unrequited love or revenge.

Anything which challenges the ego of the opposite sex demands a misdemeanor of this sort – which in itself is an extremely churning thing to say or hear in this 21st century. This so especially after centuries been spent by women fighting for their right to simply BE – to simply survive.

Rangoli Chandel, better known as the acid-attack survivor sister of the fiery Bollywood actress Kangana Ranaut, talked openly in one of the recent interviews of the duo.

Rangoli was a beautiful, 23-year old medical student when she was attacked by an unknown man who alleged he was in love with her.

”Acid permeates into the skin if untreated. So immediate medical help can only control it. If it is stronger, it destroys your organs. I have lost one ear. I have lost 90% vision in one of my eyes. I have a dysfunctional breast. And all this is after I got the best possible treatment in the country. Acid attack is not a regular accident. When it happened, I was unable to breathe because my windpipe was shrinking. Scars were the last thing on my mind then..My prerogative was struggling for my life because both my food and wind pipe were severely damaged. I was in the hospital for a month and I underwent multiple surgeries during that time. Everyday I was taken to the operation theater for something or the other.”

Apart from being excruciatingly painful, the experience is emotionally and socially draining.

“Plastic surgery is not so easy. It doesn’t give you a new face. I had to get skin from thighs and get grafting done. It took 57 surgeries. The physical pain was excruciating and at 23 the mental trauma was painful..I didn’t have the courage to face a mirror for three months. I was shaken up. Kangana was a struggler back then but she brought me here. My parents couldn’t bear seeing at me in that scene then.Once I came back from hospital, Kangana would personally sponge me. The grafting was freshly done and it needed care. Kangana never cried in front of me but I could sense her tears.” Kangana took a brave front in taking care of her sister solely. At this time, Rangoli was engaged and was soon going to be married to a man their parents had chosen.

”A guy had obsessed over her for years but she was very emotionally attached to the man my parents had chosen for her. They were in an intense relationship for two years but after the attack he immediately washed hands off her. I was amazed at her strength when I told her that he might not marry you. She dismissively replied saying ‘whatever’.” 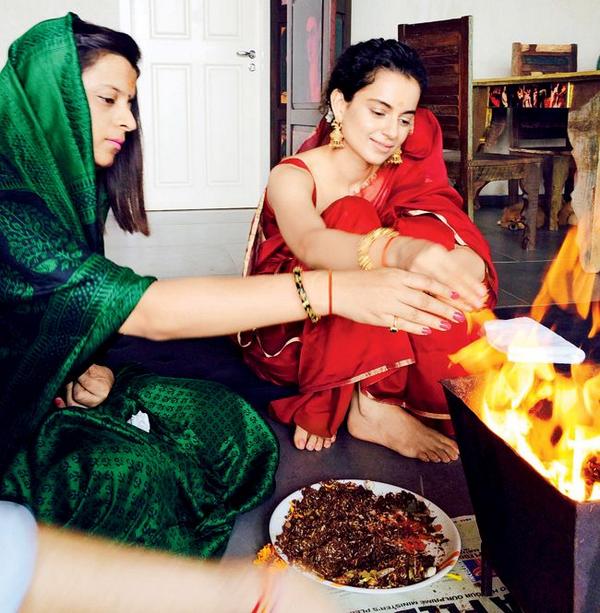 Kangana has been always keen on Rangoli talking about the subject so that she can put a fine example of bravery and pride. As she puts it, the victim shouldn’t be made to feel guilty, but the men who stoop so low in their aggression should be.

”…When she was struggling, looking for hope, I didn’t know whose example to show her. We don’t glorify the right heroes. And I want men to know how far people stoop in aggression. We need to tell our children that one who does such things is not our hero. Hero is the one who survives blame, rejection and ruthlessness. People should give my sister the credit she deserves. There is no reservation for attack victims. There are reservations for physically able people but those ostracized for no fault of theirs have no one championing for their cause. The guy who did this to my sister was out for two years before his trial started. Our society should see what criminals are capable of and set an example that no one takes this route of destroying someone’s life. Her life is not ruined but he is a scumbag and that should come across.”

Rangoli eventually fell in love with Ajay, her childhood friend – and despite his mother’s initial disapproval both of them got hitched. However, even if they hadn’t, Rangoli wouldn’t have had a sob story to tell. She’s inspirational like that.

“Marriage was the last thing on her mind when she was fighting for life and her fiancé fled. But when she and Ajay were planning to marry, she was past that phase. When I asked her what if it doesn’t happen and she promptly replied saying, ‘If it doesn’t happen, it doesn’t happen. We will go for dinner somewhere.’ She is so tough and inspirational. Later that night, we went for dinner. And over Rajma Chawal, we chatted and laughed about the restaurant’s name.”

Rangoli strongly feels that an accident shouldn’t define one’s life. Yes, it’s hurtful – but victims shouldn’t be made to feel victimized at every moment of their life.

”My parents were doing their filmy drama ki iski shaadi kaise hogi, kya hoga iska.People would keep staring at my scar and say arey kya durghatna ho gayi. Ab ho gayi, toh ho gayi…aage badho yaar. Even women have to stop being stuck on what happens to them. People should move on!”

Kangana Ranaut might be labeled as the most badass woman in Bollywood, but she clearly doesn’t want to own a label calling herself ‘special’.

”We are real women who have worked hard, fought our battles and won!”

”Everyone goes through sh*t and that’s not in anyone’s control. No one wants to talk about it. We glorify fairytale angles far too much. I don’t think mine or Rangoli’s life is any different than that of others. To give the impression that I was born a special child and over the years, I became more special is the most clichéd way of portraying a celebrity. We are real women who have worked hard, fought our battles and won! Life cannot be a joyride, it will be a roller coaster ride. Any incident or accident can’t define you. Go beyond it and be much more.” The sisters deserve front seat in Bollywood if we want to talk about real feminism and role models. Past the vanity and glam, Bollywood certainly has a faculty of beautiful and inspiring people.

20 Weirdest Addictions Of People From Around The World

Shobha De Takes A Dig At UP CM Yogi Adityanath, Gets Brutally Shut Down On Twitter

Now You Can Get 1 Litre Of Petrol Free For Enjoying A Birthday Cake! Here’s How