Ask any woman about period problems and she can write a book on it. From period cramps to the constant anxiety about stains, every woman goes through a hellish period during those 5 days (or more) every month. The worst part is, it even worries you if it decides to stop visiting you! But, can you imagine if these period problems were human?

Every woman would have loved to give them a piece of their mind (or maybe even a punch or two) if these problems actually existed in physical form. Here is a list of (purely on the basis of the irritation level they cause) things all women would want to say to their periods and specifically to their period problems if they were human.

A normal periodic cycle occurs (or rather reoccurs) every 28 days, but rarely does it happen that it comes exactly on that day/date every month. This is one of the major period problems for all women. So the first questions any woman would like to ask her period is, “Okay, let’s just make a schedule and follow it please?”

2. We just can’t share our clothes, especially our undies

Most women have had their clothes (especially their underwear) stained because of unexpected period call or because of uncontrollable period flow. This is one of those period problems which leaves a forever mark. So, pretty sure that women want to tell their periods (if they were human) that sharing clothes with them is just not okay.

3. The feeling is not mutual

The menstruating days are the worst days of the month for every woman. Despite it being a positive bodily function, women only have hatred towards it. Any woman, if given a chance to interact with their period and periods problem would like to say, “I know you are good for me. But I’m sorry, I just don’t feel the same way about you.” Menopause is what follows once a woman’s biological clock changes and is replaced with the periodic cycle. Most women would prefer menopause over this monthly painful ordeal and hence if periods were a person they would tell it that they like period’s step-sister menopause more. 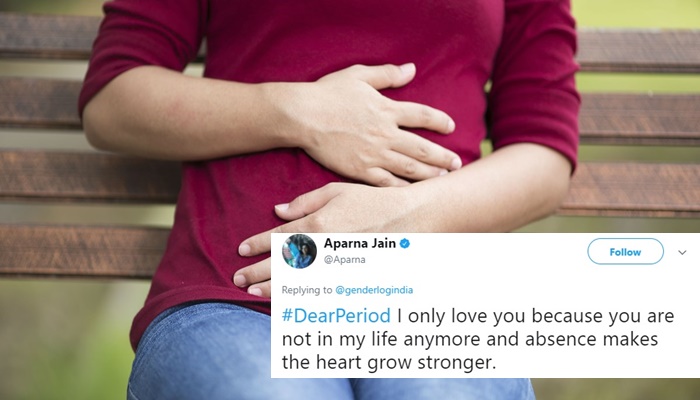 5. Stop being so controlling

One of the major period problems faced by women is that every activity and decision taken during those days of the month have to be based in and around the period itself. Be it about going out while raining or wearing that cute white dress! Hence, if periods were a human, women would ask them to stop being so controlling all the time.

During those days of the month, women indulge in food more. Right from chocolates to ice-creams everything is craved by women during their periods. And, it’s not something they can do anything about. Hence if periods were a person, women would advise them to control the food intake and maybe go on a diet.

The name ‘period’ is too cool for something that causes so much pain, on a regular basis. Most women would agree that periods need to be renamed to maybe ‘Satan’ or ‘Devil’. If periods were human they women would like to ask them to change their name.

Women hate the fact that they have to go through period problems every month and that men have zilch problems where their bodies are concerned (at least sexually or in a reproductive manner). So given an opportunity to converse with periods they’d like to ask why periods are so sexist?

If a woman hasn’t had sex in a while, she keeps wondering why is her periods late. During this anxiety period, if periods were human, women would definitely want to ask them, “Hey, what’s going on down there? A little update would be very helpful!”

If only these dialogues would have been possible! What do you think? Taking the cue, if you often feel the frustration of explaining periods to some uninformed men, then you can take help of these sassy questions.

Not Only Amazon, These Companies In India Are Also Doing Things Differently To Improve Work Culture

Kiara Advani Is Redefining The Meaning Of ‘Hotness’ In This Eye-popping Black Bikini!

10 Ways To Turn Your Man On Without Touching Him

10 Times Bollywood Celebrities Spoke About Sex And It Mattered