10 Famous Temples of Bajarangbali Outside India

There is something about the Hindu Gods and Goddesses that their universality and popularity knows no bounds! One such revered figure in Hinduism is that of Lord Hanuman. An ardent devotee of Lord Rama, the seventh incarnation of Lord Vishnu, Lord Hanuman is often regarded in the contemporary age as the first ever superhero!

1. Trinidad’s Hanuman Temple, one of the largest outside India

Trinidad may be one of the sexiest beach and party locations in the world, this place also boasts of having the largest Hanuman Temple in the world (outside India). The main deity stands at a whopping 85 meters. Painted in pink and orange tones with golden hued accessories, the temple stands right adjacent to a Dravidian-style temple. The temple’s exquisite grandeur and lovely colors make it a place worth visiting the next time you’re in Trinidad!

2. Karya Siddhi Hanuman Temple in Frisco has been built at a cost of $7.5 million

Located in Brickfield, Kuala Lumpur, the Sree Veera Hanuman Temple is done in a typically Malaysian architectural pattern, the temple houses two distinct idols of the Lord. One idol, done in white marble, sees the Lord seated in a yogi posture while the other one, painted in green, sees the Lord blessing all His disciples.

4. Sri Anjaneyar Temple, where the Lord’s idol is believed to have turned left on its own

Anjaneyar is another name for Mahabali Hanuman. Located in Port Dickson, the temple is looked upon as one of those few temples where the Lord actually resides. Apparently, when installed, the Hanuman idol sat absolutely straight. However, eventually, it changed position and turned towards the left, facing the sea. Magic or no magic, you will be mesmerized by the amazing place and by the purity which the temple offers! 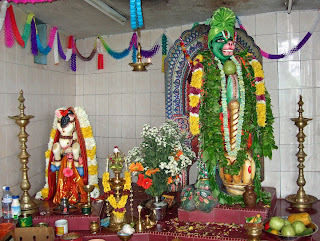 5. Sankat Mochan Hanuman Temple, for yoga, meditation and tranquility classes in the USA

If you’re in the USA and wish to visit a quaint temple upon the hills offering an atmosphere of tranquility and purity, the Sankat Mochan Hanuman Temple is the place to be. Located in Mount Madonna Center, the temple also offers retreats and classes on yoga, meditation and tranquility. So, no matter where you’re located in the States, visiting this shrine at least once is mandatory indeed!

6. Shri Hanuman Mandhir in New York has the Lord with multiple heads and hands

Located in Glen Oaks, New York, the temple resides a 5-faced idol of Lord Hanuman. The five faces are those of Lord Hanuman (in the center), Lord Adivaraha, Lord Narasimha, Lord Garuda and Lord Hayagriva. The idol also has 10 hands holding 10 different weapons. It is done in polished silver, and attracts a large crowd every weekend!

Located in Kathmandu, this is Kathmandu’s royal palace, also known as Hanuman Dhoka. Revered for reasons aplenty, the dhoka or the gateway, has a huge statue of Lord Hanuman. This statue is prayed to by all the Hindus visiting the place so much so that the main face of the statue has literally vanished under the thick coating of orange vermilion! 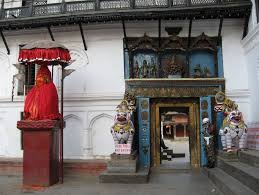 8. Sankat Mochan Samiti, Melbourne, a temple-cum-NGO that looks after the security of Indian women

This is much more than a temple. While regular pujas are done here, the main purpose of this samiti lies in this non-profitable organization with an aim to provide better guidance and security to Indian women in Australia. If you’re in Melbourne, a visit to this samiti is indeed mandatory.

9. Sri Hanuman Mandir, Georgia, is a temple and research center on Hindu Philosophy

Located in Georgia, this Hanuman Mandir conducts daily prayers in honor of Lord Hanuman, and His revered, Lord Ram Parivar and Lord Jagannath Parivar. This temple aims at preserving the pride of Hinduism among NRIs along with conducting researches on Hindu Philosophy.

Located in pristine Brampton, Canada, this temple is operated by Swami Mohan Dass Sewa Samiti of Canada. While the temple looks like a classy palatial structure from the outside, when venturing inside, it will give you an aura of utmost sincerity and purity that every Indian temple offers to its devotees. Among a series of idols, Lord Hanuman resides in the center with other deities adorning the periphery.

This Is Why 180 Families Of Saharanpur Adopted Buddhism

12 Lesser-known Facts About Ved Vyasa, The Sage Who Wrote The Mahabharata

If What They Say About This Mummified Monk Is True, We Have A New Buddha

Suchitra Krishnamoorthi Tweets About The Azaan, Calls It ‘Uncivilized’

6 Of The Most Visited Religious Places Around Mumbai