Gujarat Poster Spells Out Rules For Muslim Women, Says They Should Not ‘Look Up’ When Walking On Roads

A poster — put up by the local Ittehad Foundation in Chikhli village in the Navsari district of Gujarat — has asked Muslim women to follow a number of laws when they are walking on the roads.

The poster, providing 10 points on how Muslim women should and should not behave when walking on the road, comes with a tagline: “Tum naqaab mein raho, zamaana aukaat mein rahega.” (Loose translation: “Stay in the veil, and the world will stay in its limits.) 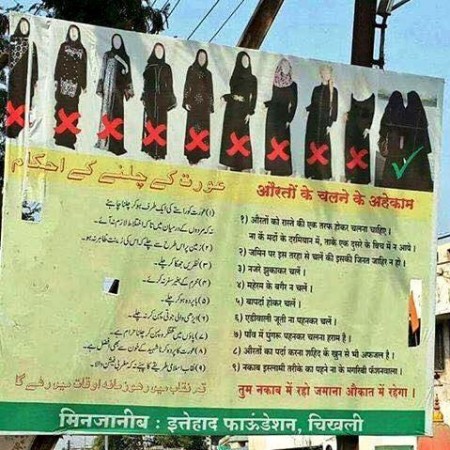 It asksMuslim women to lower their eyes on the road. However, critics call it a safety hazard since it prevents one from seeing what’s coming ahead.

Another rule is that women should not also wear heels or any jingly foot ornament!

It also says that women should always walk by the absolute side of the road, so they do not come in between men! Another says they should not venture out without their veil.

Few months back, 75-year-old Muslim preacher Hydrose Thangal Musthirivalappu, advised the parents (father Aboobacker and his wife Hafsath, 24) of a newborn baby, to not feed the baby until the fifth azan call is heard from the mosque. The incident happened in Kerala.

The debate around Muslim women wearing veils is not a new one. The debate takes in religious freedom, female equality and secular traditions.

Globally, The Netherlands is the latest country to ban the burqa or full face veil. Other European countries that have banned the burqa include Belgium, Bulgaria, and France, despite challenges from critics suggesting they curtail religious freedom.

There are also currently movements in Germany, Italy, Switzerland, and Norway to introduce restrictions on burqas and face veils. An August poll indicated that 57 per cent of Britons favored banning the burqa, though no such law currently exists in the UK.

17 Painful Experiences Every Girl With Curly Hair Knows Too Well

Here Is How You Might Be Able To Spot Fake News

20 Creepiest Places On Earth Where Nightmares Are Born

All Indians Must Know These 10 Commandments On Love