Are You Curious To Know About Your Future? Just Ask Google!

Many of us want to know what the future holds for us. It seems ‘Lord’ Google has heard our secret wish.

The search engine giant launched GoogleFortunetelling app that claims it can ‘predict’ your future.

Users are invited to ask any question they may have about their future and Google examines old search data in an effort to try to come up with a prediction.

A description of the app reads:

“With our latest addition to Google we try to experiment with fortune-telling. Based on your previous search results and your profile, we try to make a good prediction of your future.”

Excited to try the new app? Go, ahead. But there a twist to it. It isn’t that easy to know your future as it seems.

As you begin to type a question, something happens. Yes! The question you’ll type will be replaced by another question. And do you want to know what it is? See the image below: 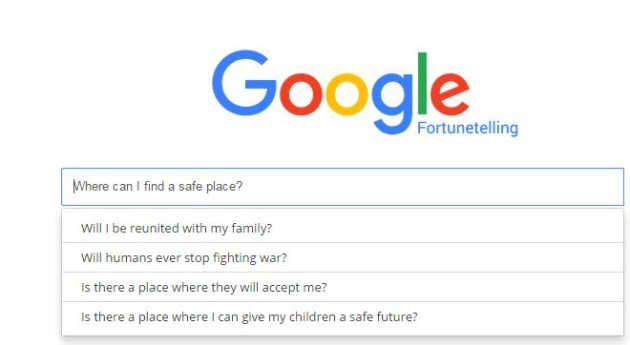 Following that you are promptly redirected to this page:

In a very creative and endearing way, Google asks us to think and reflect on the worst migrant crisis since World War II.

Thousands of people are trying to take refuge in Europe, fleeing the four-year-old civil war in Syria and other conflicts in Afghanistan, Yemen, Iraq and Libya.

According to the International Organization for Migration, a record 473,887 refugees and migrants had crossed the Mediterranean to Europe so far in 2015, including at least 182,000 Syrians – almost 40% of the total.

MS Paint Is Not Dead, It Will Be Available On Windows Store

11 Groundbreaking Technologies That Could Shape Our Future

Boston Dynamics Unveils The Robot Soldier Of The Near Future

10 Best Phones Under Rs 10,000 That You Can Buy On This Festive Season

‘Udta Punjab’ Leaked Online 2 Days Ahead Of Release. Filmmakers Get It Removed From Sites