Emraan Hashmi’s son Ayaan was diagnosed with second-stage Wilms’ tumor. It’s an African disease mainly occurring in children and affects the kidneys. While the struggle must have been excruciating for a four-year-old Ayaan, it must also have been emotionally challenging for Emraan and his wife. 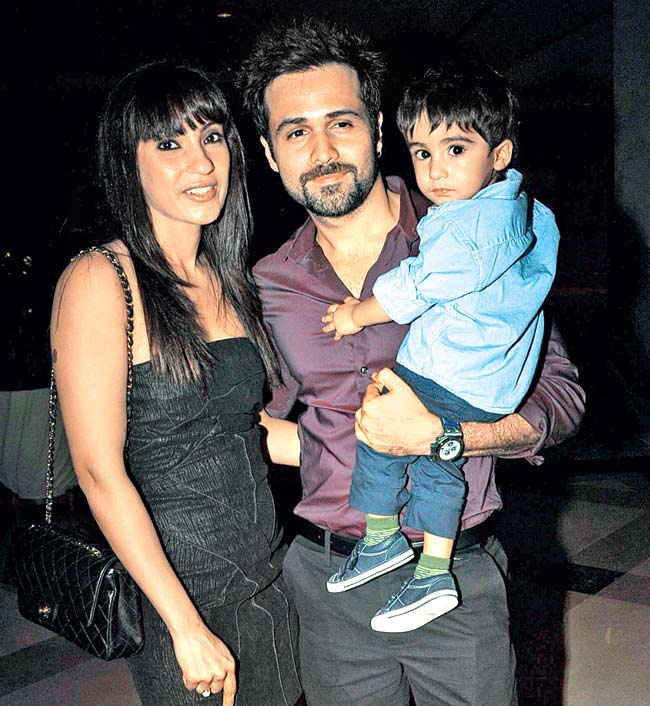 And so, after winning the fight like true superheroes, Emraan Hashmi is releasing his memoir in the form of a beautifully written book, ‘Kiss Of Life’ with a motivation to inspire many more victims and provide solace to struggling loved ones.

Here’s an excerpt from his book, describing how he acted as Batman to convince Ayaan to miss out on junk, have medicines and not play around.

‘Who is this?’ I waited for a split second before answering him. I needed to make sure I replied to him in the right voice. He might be young, but he’s very sharp.

There was a pause. I could imagine his eyes widen with disbelief. ‘Y-yes? Is that really… Batman?’

‘I’m okay, Batman. Are you fighting crime in Gotham? Papa told me!’

A lump formed in my throat. I decided to tell him what I had called him for in the first place.

He breathed heavily with excitement. I could hear it over the phone.

‘Ye ‘Then listen to me very carefully. It will take some time, but once we are done, you are going to become better than Iron Man! You will be Ayaan Man!’

I knew Ayaan loved Batman. But I had already donned that cape. If I had offered him the chance to be Batman, he wouldn’t have quite liked the idea of us playing the same superhero. The incongruity would get to him. That’s how I decided we’ll pronounce his name in a way that resembled another one of his absolute favourites — Iron Man.
‘Okay,’ he replied. ‘What will I have to do?’

‘Listen to me very carefully, Ayaan…’!’

Five minutes later when I walked into the room, I saw him playing with his superhero figurines on the bed. He looked up at me sheepishly. I looked back at him and raised an eyebrow. He was brimming over with excitement, fighting the urge to tell me what had just happened. ‘Daddy, guess who called!’ I sat beside him hurriedly, playing along. ‘Who?’ I whispered, looking at his big, brown eyes attentively. ‘Batman,’ he grinned. ‘He told me how to become a superhero!’ I gasped exaggeratedly, matching his level of excitement, then leaned forward and hugged him tight. My son was going to be a superhero.

I remembered the night before, when we had tricked Ayaan into believing that we had checked into a hotel. I had met the doctors and nurses in an adjoining room so that he didn’t overhear my conversation with them. Once I went back to his room, he threw a fit when he was given the insipid hospital food. He demanded pizza and all the other junk that got him happy. It took us some time to get him to settle down, after which he asked me a simple question.

‘Is it my birthday or is it Christmas, papa?’ he inquired, earnestly. ‘Is that why we are in a hotel? To celebrate?’

‘Yes Ayaan,’ I replied. ‘It’s gonna be your birthday soon and we will celebrate many many more birthdays together!’

My four-year-old baby boy was diagnosed with second-stage Wilms’ tumour, a type of cancer that affects the kidneys and typically occurs in children. Wilms’ tumour is very uncommon. Children of African origin are more prone to suffer from it than children of other races. It is named after a German doctor, Max Wilms, who wrote one of the first medical articles about the disease in 1899 — it would seem unfortunate for a man to have a damned disease named after him. Because at that moment, I disliked the word itself.

Ayaan’s cancer was my life’s biggest hurdle. Suddenly, I had to prove to myself that I had in me the stuff that my role models were made off. I had to be Superman, in my own little way. I had to not just fight away the enemy that threatened my son’s life, but also prove my mettle professionally… But the real hero was my son… Kids like him are made of sterner stuff than we adults are. They battle the disease one day at a time for months, sometimes years, enduring pain and sacrificing their moments of childhood that will never come back… However, Emraan wants to end the Batman story soon. He wants his son to to know how he has battled it all and he has it in him to be a superhero; the one without a cape but with utmost responsibility and bravery.

My son wanted to be Batman. In many ways, he has become him. He has coped with pain and has fought cancer. Just like all stories need a conclusion, the story of Batman needs to end too. I don’t have the heart to tell him that Batman doesn’t exist. I don’t have the strength to tell him that after all those sessions of chemo, he won’t have any superpowers. But probably, he will learn by himself, just like I did, that living your life responsibly is a superpower by itself.

So after writing this book, I am going to make one final call to him as Batman. That story needs some closure. This time, however, I won’t be convincing him to have the meal that he’s fussing about or I won’t be calming him down before his chemo session. I am going to tell him, ‘Son, you have endured it all. You are six years old now, and soon you will finish school and go to college. I will grow old and wither away, and you may have to face the big bad world out there by yourself. But you’ve got a great head-start. You have won the unlikeliest of battles already, so now, whatever it is that comes your way, you have to put on that cape of responsibility, hold your head up high bravely and give all of life’s problems that knockout punch.’

Excerpt sources: The Times of India and IndiaTimes

This memoir promises to be emotional, yet the excerpt looks hopeful.

And which is why I’d want to give it a read!

8 Necessary Qualities In A Video Game Made Specifically For Indians

10 Hit Dads Of Bollywood And Their Flop Sons