New Delhi’s independent feminist publisher, Zubaan Books, launched their internationally collaborated comic book “Drawing The Line: Indian Women Fight Back!” earlier this year in India. In October, they are all set to be launched in North America. The 14-part,170 page comic book features everyday tales of Indian women illustrated by these very women in the form of art. The inspiration behind the venture came after the infamous bus gang rape in New Delhi followed by the murder of a medical student back in 2012. This led to a seven day workshop hosted by Zubaan books and The Goethe Institute in Germany where women across all age groups were motivated to turn their frustration into illustration. The comic book is a great conversation starter and has stirred quite a spark in people who are interested in taking women’s right as a global issue. North American publisher Ad Astra Comix has affectionately welcomed Drawing Line to their country. Its co-founder, Nicole Burton says, “Women in North America need to expand their outlook of how we look at feminism and how it can be inter-sectional.The book is a great piece about sisterhood.” 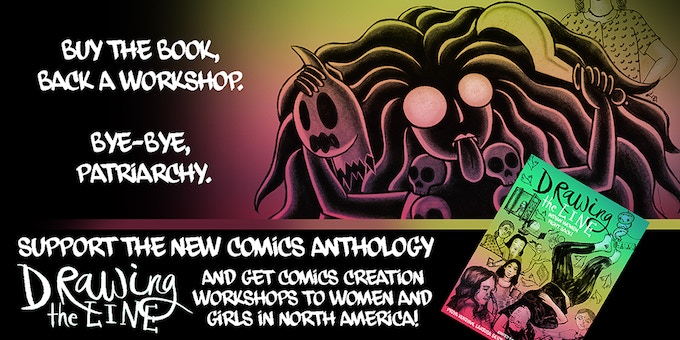 This initiative is a new milestone for the Indian illustrators, especially women. Burton feels that there is a rising tide of women in South Asia and Middle East taking up illustrating and drawing. This is a good news considering the feminist issues that we are rattling off in these countries. Zubaan is an independent publisher owned by Sampat Lal, who is famous as the leader of sisterhood feminist group ‘Gulabi Gang’.

‘I Am A Romantic Goddess’ Says Radhe Maa About Ram Rahim

20 Signs That Confirm You Were Born To Be A Poet

This Is The World’s Most Exclusive Passport, And It Has Been Issued To Only Three People In The World

Top 10 Controversial Books Of All Time