In a heartbreaking moment, a devoted dog named Mollie visited the hospital to big final goodbye to her dying owner, Ryan Jessen.

Jessen, from California, was hospitalized with a ventricular brain hemorrhage and did not recover.

As friends and family sat by the 33-year-old’s bedside, the hospital administration allowed his pet boxer dog, Mollie, to also be present.

“The hospital did the sweetest thing for us and allowed us to bring my brother’s dog in to ‘say goodbye’ so she’d know why her human never came home. If you knew my brother, he really loved his sweet dog,” Jessen’s sister Michelle wrote on Facebook. 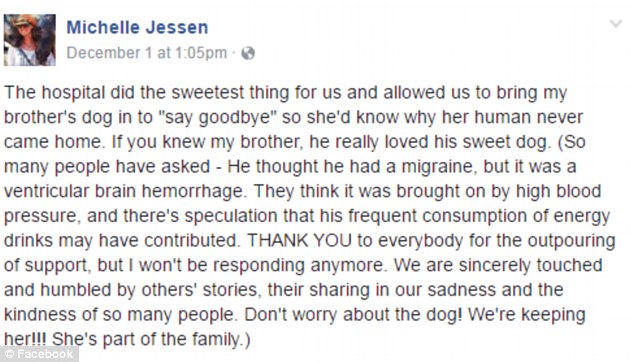 The emotional moment was captured on video and was posted on December 1. The video has been shared over 87,000 times and has received over 9.1 million views.

An upset looking Mollie was seen desperately sniffing her dying owner when she is lifted onto his hospital bed.

Jessen’s sister, Michelle, pictured during an emotional moment as she says goodbye to him. Facebook

The family has said he has donated his organs.

Ms Jessen also added Mr Jessen’s heart was due to save the life of a 17-year-old boy in time for Christmas.

‘Life Sentence’ To Three Asiatic Lions For Murder Of Humans

A Kannada Actress Was Mauled By Stray Dogs In Mumbai. Can Sterilisation Stop This?

It’s Been Proven; Cows Hold The Cure To HIV