Get Over ‘PadMan’. The CupWoman Is Here To Take The Whole Issue Of Menstrual Hygiene To The Next Level

Much awaited film of 2018, ‘PadMan’ has finally released. Since a few months ahead of the film’s release, the internet has been overflowing with all sorts of talks about the film, its leading actor Akshay Kumar, producer Twinkle Khanna and the issue of menstrual hygiene. PadMan challenge has brought a number of celebs as well as commoners get clicked with a sanitary napkin, hoping to break the taboo around the issue. To be honest, from the social media trends, it appears that they have been successful to a great extent.

Overall, there is no denying that through its subject, ‘PadMan’ has taken not only the internet, but society as such by a storm. People are talking about making sanitary napkins, commonly known as pads available to the girls who have been deprived of them so far. What used to be a secret topic of discussion among girls is being talked about openly on the social media by one and all.

Also, there is no doubt that sanitary napkins have transformed the way women used to live their periods and this is a widely known fact. But one thing that not many people know is that there is an unbelievably huge flaw in using sanitary napkins. And this very fact also leads to the conclusion that the very core of film ‘PadMan’ is hugely flawed. Let us see how!

Even though Padman has led to a breakthrough in society by making people talk about menstruation openly, it doesn’t fully address the problem of coping with the process on the whole. Pharma companies may want women to believe that their gel-packed sanitary napkins, that smell like freshly cut flowers and can be worn for hours on end as the ultimate solution to their menstrual problems, but that is far from the truth.

From the turn of the 21st century, a steady movement has been going around the world regarding the ill effects of using sanitary napkins. A mix of cotton and rayon make up a sanitary napkin and they are covered with another layer of plastic and laced with chemicals to keep foul odor at bay. Cotton itself is a dirty crop whose cultivation requires excessive use of pesticides and fertilizers, and these are inadvertently introduced in the body through these sanitary napkins.

An alternative to the synthetic pads is bio-degradable pads. However, they don’t keep waste collectors from being exposed to toxins or the health hazards of users at bay. Further, the manufacturing of a napkin requires the cotton used to be bleached milky white, which releases the toxins dioxin and furan. They are carcinogenic and known to cause endometriosis and cancers related to the breast, cervix and ovaries. Strains of Dioxin stay in a napkin and can accumulate for up to 20 years in the body with prolonged use.

A woman menstruates around 400 times in her life and uses 15,000 sanitary napkins in the process. Imagine the quantity of dioxin that may accumulate, thanks to the extensive use of these napkins!

Even if cancer seems like a long shot, most women would agree that they have dealt with irritation, redness, chaffing around the genitals and foul odor in “those days of the month”. Irrespective of how much pad makers try to convince users that a napkin can be used for 5-6 hours without requiring a change, the bacterial growth on them can cause a host of issues. Vaginal thrush and yeast infections are common problems reported by women, by-products of the cocktail of chemicals used to make them.

Aside from the direct health hazards associated with them, pads pose an environmental hazard as well. Every year, around 121 million pads used by 336 million girls, make their way to the landfills and sewage system in India alone. These sanitary wastes are not segregated while being dumped and their synthetic components can take hundreds of years to decompose. The lack of proper disposal facilities has also led a large number of users to dump them in nearby rivers and water bodies, leading to serious risks of water contamination.

Manufacturers of bio-degradable sanitary napkins may argue that their product gets decomposed in three months, but why pose an unnecessary burden on the mother earth even for three months. Millions of pads being dumped every month for three months are still a huge burden, isn’t it? And why is that burden called unnecessary?- Read the complete story to know that!

Sanitary napkins are not only hazardous to the health and environment, but they also pose another problem- that of cost effectiveness! An average packet of a sanitary napkin costs around Rs 30 to Rs 40 for 10 pads, with prices rising to as high as Rs 100 for a packet of 7, given the “special features” embedded in them and the company producing them. So, calculating the cost of sanitary napkins at the rate of Rs 40 (a very modest figure) for every period for 400 periods that a woman goes through in her lifetime implies an expense of a minimum of Rs 16000. Moreover, buying sanitary napkins isn’t as easy because they need to be bought month after month.

Above is only the gist of all the downsides of sanitary napkins and their usage but still enough for convincing even their most ardent supporters that pads, even the bio-degradable ones are not a sustainable menstruation product, leave alone being an ideal one!

The social, environmental and personal health and hygiene problems associated with sanitary napkins have caught the attention of many and much innovation has been introduced in this regard. Sadly, this has failed to grab the attention of millions of the people in the world promoting the use of sanitary napkins. And this includes all the celebrities and organizations promoting their use!

Having said that, it is the time to introduce the ideal as well as sustainable menstruation product to the readers- A menstrual cup.

A menstrual cup is a flexible cup made up silicon and is to be used inside the vagina during periods to collect all the menstrual blood. And there are more than ample reasons to say that menstrual cup is the best menstruation product so far and far better than sanitary napkins.

Go for the one made with medically graded material and there will be no rashes, allergies, itchiness, dryness or any other skin problems. Also, a menstrual cup, when used and maintained properly can last for up to 10 years. And this one fact about them leads us to many of its benefits such as lesser visits to the pharmacy and no more worrying about stocking the product before every period. 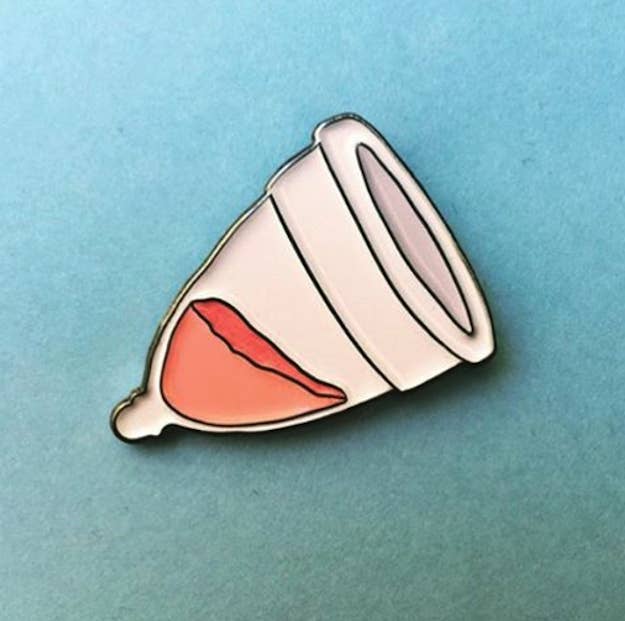 Also, the cup is extremely easy to use and can go up to 12 hours before it needs to be emptied. After every 12 hours, just empty the cup by flowing the blood away, wash it with tap water and it is ready to be used again. After the period is over, sterilize the cup and keep it in a cloth bag for reuse in the next menstrual cycle. Yes! It is actually that easy.

A typical menstrual cup costs somewhere between Rs 500 to Rs 1200 and can even last for lifetime if cared for properly. Remember we calculated a figure of Rs 16000 spent on sanitary napkins by a woman in her lifetime, and that is perhaps quite a low estimate! Isn’t that sufficient to prove that a menstrual cup is far more cost-effective than sanitary napkins?

This cost difference might not matter much to the well-off women but imagine the women who can’t afford to buy sanitary napkins every month. Spending Rs 500 to Rs 1000 can free them from the expenses on menstruation products for years together, give them a product that has no health hazards, requires no frequent rounds to medical shops, requires minimal care, and no worries about disposal!

Moreover, these cups cut down all the disposal issues since they can be reused over and over again resulting in absolutely no environmental hazards. Whats more? Girls in their periods can comfortably play sports, swim, dance, bathe, pee and even poop with the cup inside their body and be assured of no stains!

And all the reasons and facts mentioned above lead us to believe that it is the time to follow CupWoman and not ‘PadMan’. Seema Pardeshi Khandale, also known by the name ‘CupWoman’ among her followers and peers is the founder of Ashay Social Group working for a number of social causes, promotion of sustainable menstruation options being the most important of them. She is also the innovator of RUTU cup- one of the most affordable and good quality menstrual cups.

Through her dedicated efforts and tremendous vision, Seema Pardeshi and her RUTU cup have changed menstrual life of hundreds of women across the country, which includes hundreds of women living in the slums of Maharashtra.

Not only the people, but the media is also gradually understanding her vision and mission and giving her the due recognition. In an effort in the same direction, RJ Rani from 92.7 BIG FM has taken the PadMan challenge to the next level with ‘RedNeedsToGoGreen’ campaign in support of Seema Pardeshi Khandale. The two women are urging other women to post their pictures with their menstrual cup and share their experience with this supremely comfortable and environment friendly product.

A large number of women taking up the challenge on Facebook and have posted their pictures with their menstrual cup to which they have been introduced to by Seema. Take a look at some of them below:

But Seema Pardeshi Khandale and her vision will get its due recognition when all the women reading this post will switch to using menstrual cups instead of sanitary napkins, and all the men will get their mothers, wives, sisters, daughters, female friends and other women around them to use menstrual cups.

This is the time to spread the word around so that it not only reaches the common people but also the right authorities so that they can be stopped from promoting hazardous sanitary napkins and instead spread the right knowledge around.

So get over ‘PadMan’ and follow ‘CupWoman’. Quit sanitary napkins and switch to menstrual cups now!! Post and share your pictures on social media with your menstrual cup. Also, share this story with as much people as you can and spread the word of mouth. And yes! Do share your thoughts with us in the comments section.

This Valentine’s Day Rent This Guy As Your Boyfriend, Get A Free Ride In His Audi And More

In A Series Of Tweets, KRK Abused Team India And Kohli. He Deserved What Came After

NSFW: If You’re Getting Married This Year, This Tanishq Ad Is Gonna Make You Cry Like A Baby

Umpire Called A Ball Wide, But Dhoni Asked Kohli To Use DRS. The Result Proved Why He Is Great

Virat Gives Credit To Dhoni For India’s Win, Reveals It Was His Idea That Changed The Game

11 Superhero Illustrations Of Leaders On Banknotes That Tell The Truth About US, China And UK

24 Photos Of Plants That Prove God Is A Mathematician