Famed China Glass Bridge ‘Cracks’ With Each Step. People Left Stunned When They Realized The Truth

In recent years, glass-bottomed walkways have become very popular as these vertigo-inducing sky bridges test how much a person can stand while looking down at jaw-dropping heights.

A Chinese man witnessed the horror of his life when a glass pane on the transparent walkway suddenly shattered. The terrifying scene took place at the walkway around the eastern face of the Taihang Mountain in Hebei, China. At 1,180 metres (3,871 feet) above sea level, he responded with out-and-out terror. 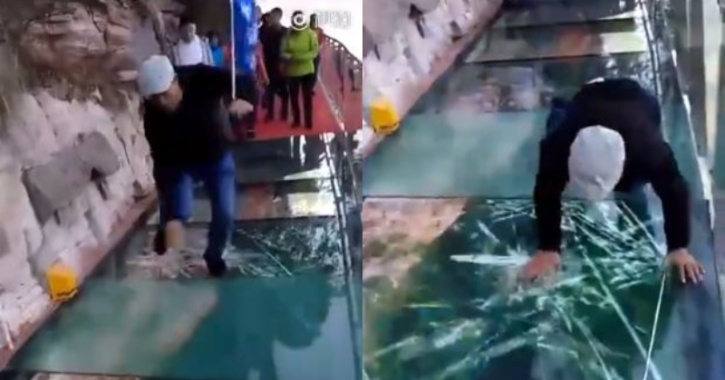 However, it was a “provocative” prank. To make the effect look as realistic as possible, the walkway designers had placed shattered fragments of glass in one of the layers, stretching across several panels at the end of the bridge. So when you walk over them, glass sounds and looks as if it’s breaking. Clearly, no one would like to hear that sound at 3,000 feet.

However, the glass isn’t really breaking, it just looks and sounds like it.

The East Taihang district administration officially apologised on its WeChat channel, and said it was merely an “effect.”

Although the structures can withstand strong winds and earthquakes, as well as the weight of hundreds of visitors, there are various safety concerns. In 2015, the Yuntai glass pathway in Henan cracked. It was closed after much panic.

Publicity stunt or otherwise, many believe the effect is bound to trigger a heart attack for many.

Take a look at this video:

These Three Animals Prove That Evolution Can Happen Incredibly Fast

Shami’s Wife Leaked His Audio Talking About The Pakistani Girl. He Accepted That He Met Alisbah

10 Reasons Why Men Should Fast On Karva Chauth