Up until now, methods of suicide bombing were largely used in conflict areas such as Afghanistan, Syria and Iraq, but it seems to be now making roots in Kashmir. On February 14, banned Pakistani terror group Jaish-e-Mohammed carried a suicide bombing attack on a bus carrying over 44 CRPF jawans in Awantipora area of Jammu and Kashmir’s Pulwama district. It is said that Jaish has been running several training camps in Pakistan, which are serving as the breeding ground of terrorism in J&K.

The bodies of the soldiers martyred in Pulwama reached their homes on February 16. The bodies were cremated in full state honours. The nation stood united in anger and grief as protests and candle marches were organised throughout the country to pay homage to bravehearts.

Like everyone, Bollywood too stood united in grief with the CRPF families. Actors like Akshay Kumar, Amitabh Bachchan, Taapsee Pannu, Vicky Kaushal, Abhishek Bachchan, and Ajay Devgn took to Twitter to express their solidarity with the bereaved families.

Putting words to the pain that everyone feels, actor Ayushmann Khurrana penned down a small but extremely heartfelt poem for the martyrs. The poem captures the emotions of families of CRPF soldiers who send sons, brothers and husbands on the battlefront.

Have a look at the poem here: 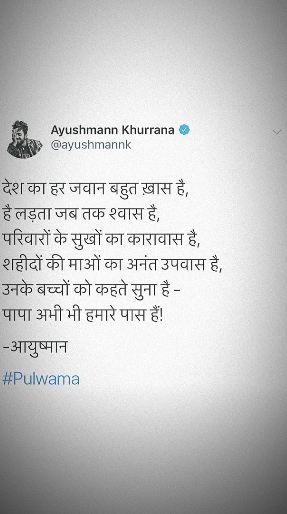 Shocked and deeply saddened. My condolences and strength to the families of the CRPF soldiers in #Pulwama

In addition, actor Anupam Kher too took to Twitter to recite a heartfelt poem about the courage and sacrifice of our soldiers. Here is his tweet:

I got this poem/text as a message. It compares the life of a soldier with that of a civilian. It moved me & made me realise how easy it is to take armed forces & their sacrifices for granted. Please share it with the world. Thanks to the person who wrote it.🙏 #SaluteToASoldier pic.twitter.com/zcwchcDFs5

Below is the text of the poem recited by the actor:

You pursued your degree,
I had the toughest training.
Your day started at 7 and ended at 5
Mine started at 4 till 9
And some nights also included.
You had your convocation ceremony,
I had my POP.

Best company took you
And best package was awarded,
I was ordered to join my paltan
With 2 stars piped on my shoulders.
You got a job, I got a way of life.
Every evening, you got to see your family,
I just wished I got to see my parents soon.

You celebrated festivals with lights and music,
I celebrated with my comrades in bunkers.
We both married.
Your wife got to see you every day,
My wife just wished I was alive.
You were sent to business trips,
I was sent on Line of Control.

Because I was lying in the coffin
With medals on my chest and
Coffin wrapped with tricolour.
My way of life ended,
Yours continued.
We both left home at 18.

Meanwhile, in a direct warning to JeM and other terror groups taking shelter in Pakistan, PM Modi said: “Ours is a new India with new methods and policies. Those who spray bullets or those who provide guns and bombs to target our soldiers, will not be spared. We will not allow them to sleep in peace.”

WTF! Multi-Millionaire Offers Rs 2 Crore To Anyone Willing To Tie The Knot With His ‘Pure’ Daughter

Hardik Pandya Is Back With A Bang, And Twitterati Can’t Control Their Excitement!

These Offbeat Tattoo Ideas For Men Will Tempt You To Get Inked!

Why Millennials Should Be Proud Of Their Mother Tongue?

Chicago Has Set Its Train Tracks On Fire For This Reason